The objective of this assignment is to practice the use of 2-D arrays with loops. You will write a program to play a game called Connect6 (A–Alt), which is played on a 19 x 19 game board by two players Black and White. Black plays first, by placing a black piece on an empty position of the board. Then, White and Black take turns, placing two pieces of their colors to empty positions each turn. The player who first connects six or more consecutive pieces of his/her color in a line (horizontally E—>, vertically $, or diagonally NZ) wins the game. When the board is full and no player connects six or more, it is a draw game. Figure 1 shows an example game board. The characters ‘B’, ‘W’, and denote black piece, white piece, and empty position respectively. The rows and columns are named in numbers 0,1,2,… and uppercase letters A,B,C,… respectively. 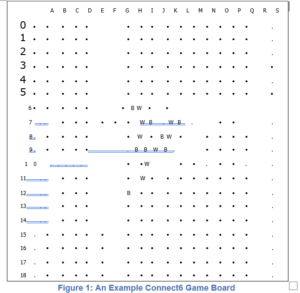 A two-dimensional array of char is used to represent the game board.

■ The game starts with an empty board. Black moves first by placing one black piece on an empty position in the board. Subsequently, White and Black alternately put two of their pieces on two empty positions.

In each move, the input is a character followed by an integer, e.g., A5, to denote the input position. (Hint: You can use c in >>  >> …; to read an input. The column letter and row number can be read appropriately even they are typed immediately together.)

A user input is valid if: (a) it is a proper board location within bounds, and (b) the input position is empty. Note that column letters must be uppercase. Lowercase letters are considered invalid. You should warn the player about invalid inputs and prompt the same player to enter again until a valid input is entered. Check the vertical, horizontal, and diagonal winning conditions. If the game is over, print the messages “Black wins!”, “White wins!”, or “Draw game!” accordingly.